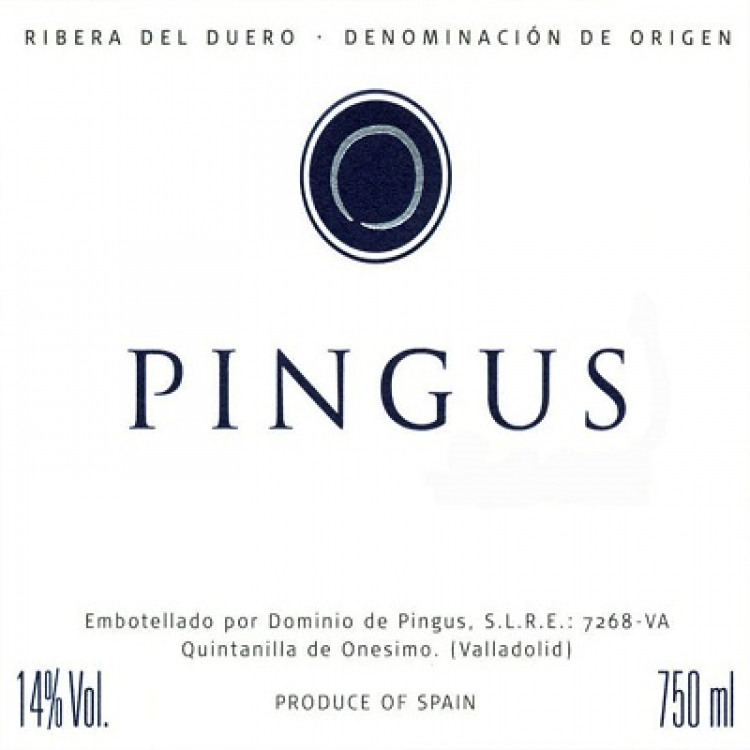 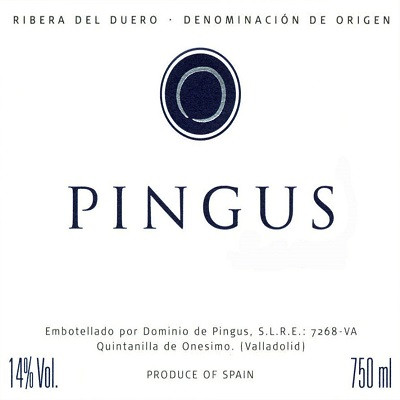 Wine is in its original packaging and in good condition, meaning levels to base neck or better.

Exotic aromas of dried dark fruits such as blackberries combined with figs, mushrooms and meat. Dried flowers too. Full body yet agile and very fine. The quality of the tannins are next to none. A truly phenomenal young wine that sets to standards for finesse and elegance in a mindboggling textural way. Glorious. Drink or hold.

I don't think I've ever tasted a wine more recently bottled than the 2014 Pingus, which was bottled in the morning and I tasted it that very same evening! Peter Sisseck compares this to the 1995, the first vintage ever produced, when he learned that when you have such perfect grapes, you should do very little to the wine. He's been trying to replicate that first vintage, but there's nothing you can do to force it, as it has to be the natural conditions of the vintage that bring those grapes. What he also learned with the 1995 was that with wines like that, you need a long and slow aging in oak; so for the 2014, he decided to do a little longer élevage—three winters in barrel—but in 100% used barrels, something he started in 2012. If it would have been new oak, as in the past, it would have been impossible to have such extended aging without marking the wine too much and possibly forever. The wine was quite tannic to start with, but it was racked every six months, and in that way they have managed to tame those tannins without getting the wine tired, as the aging itself was quite reductive. The nose is quite harmonious and open, but maybe not very expressive, a normal thing considering the extremely short bottle age it had (hours!), but it should gain precision in bottle. In instances like this, you have to guide yourself by the palate. And it's precisely on the palate where you find that texture that is almost unique to Ribera del Duero when it's as perfect as this. It's very different from other zones, a velvety mouthfeel and a surrounding sensation of comfort, incredibly long. The tannins are ultra fine and with that subtle chalkiness of the limestone soils, which also added to the tastiness and the supple aftertaste. In short, I cannot think of a way of improving this Pingus other, than getting a magnum instead of a regular bottle! Congratulations, Peter Sisseck! 4,800 bottles were filled on January 16th of 2017, a slightly shorter production than the average, because part of the vines were hit by hail and didn't make it into the final blend. Now stay tuned for 2015 and 2016.

Opaque purple. Dark berry compote and smoky Indian spices on the intensely perfumed nose, which is complicated by notes of incense and licorice pastille. Deep, sappy and broad on the palate, offering sweet flavors of black and blue fruit liqueur and spicecake. Gains energy as well as depth with aeration, finishing with powerful notes of candied dark berries, smooth, harmonious tannins and wonderful persistence.

Nestled in the La Horra appellation of Ribera del Duero, Dominio de Pingus is an estate par excellence in the region, rising to consistently challenge and often surpass the mighty Vega-Sicilia.

Founded and run by a global fine wine icon, oenologist Peter Sisseck is something of an enigma. Born in Denmark, fate and an unrelenting love for the terroir of Spain’s rugged Ribera del Duero led the masterful vigneron to establish what has become a truly legendary estate in 1995. Rising further into the stratosphere than perhaps even Sisseck anticipated, given the relatively unknown nature of Ribera del Duero at the time (Vega-Sicilia aside of course), Pingus has transcended boundaries and oceans to be considered an equal of the grandest names of Bordeaux, the rarest crus of Burgundy and the smallest cult labels of Napa.

There are currently 3 wines produced by the estate:  Flor de Pingus, a single barrel cuvée called Amelia (which began in 2003), and the flagship Pingus. In a normal vintage, there are usually about 4,000 cases of Flor de Pingus, 500 cases of Pingus and just 25 cases of Amelia.  The vines are all over 35 years of age and have been farmed biodynamically since 2005.

The first vintage of Pingus was in 1995. The vines producing this fantastic wine are all at least 65 years of age and yields are typically under 1 ton per acre. The wine is 100% Tempranillo and is bottled without fining or filtration.

Please wait a few seconds whilst we process the market data for this wine...

A free Cru storage account at all of our warehouse facilities is automatically created for you on your first purchase with Cru and your stock will be instantly allocated to this personal account. Whilst in Cru’s care, this account is in your name and the contents will 100% belong to you, no matter what.
When storing with Cru you can choose to keep the stock in its current location or transfer it to another one of our 5 global storage locations.
Keeping stock in its current Cru storage facility is the safest, cheapest and most environmentally friendly option. It is also the best option if you’re buying for investment purposes and intend on selling/trading your stock later.
To keep your stock in its current storage location, please select:
30 Days Free storage is offered on all purchases from the point when the item has landed in your account. Full replacement insurance is also included in this period, as well as, when the stock is in transit to us.
Thereafter, our competitive storage (inc. replacement value insurance) rates are as follows:
If you choose to keep the stock where it is now, it will still be possible to transfer to another location or organise home delivery once it has landed in your Cru storage account. This can be paid and organised through your online Cru account later.

When ordering it is possible to either keep your stock in its current location (see Storage tab) or transfer it to your personal Cru storage account at another warehouse facility within the Cru network for further cellaring or to organise local home delivery at a later date.
To order this item and transfer it to another Cru storage facility, please select:
As always, 30 Days Free storage is offered on all purchases from the point when the item has landed in your desired location - see ‘Storage’ for more details.
Once the item has landed into your desired Cru storage account you will be notified and you will then be able to organise a local home delivery or transfer to another storage provider.
For faster transfer to our facilities in Hong Kong SAR China or Singapore then Air Freight can be paid for and organised through your online Cru account. See ‘Delivery’ tab for more details.

Home delivery can only be organised once your stock has arrived at a local Cru storage facility. For example, if you are based in Singapore, the stock will need to be transferred to Cru’s Singapore storage facility before you can arrange and pay for delivery and taxes.
If the stock status is:
In Stock - you will be able to organise delivery (or transfer) immediately after placing your order by going to “Deliveries” in your online Cru account.
Due in - place your order immediately, so not to miss out, and you will be notified by email when the stock has landed so you can organise and pay for delivery and taxes.
Timings are estimated on our best available ETAs but are subject to change depending on global and local logistics delays.
If you select the following option, the stock will automatically be transferred to your local Cru storage facility:
Once stock has been transferred to Hong Kong, estimated home delivery cost HK$180.00 including tax.
Home delivery is Free for orders over - mainland UK, EU, SG and HK only - for US and other locations please contact us before making your purchase.
For faster delivery to our facilities in Hong Kong SAR China or Singapore then Air Freight can be paid for and organised through your online Cru account.
To do this, please select “Keep stock in its current location” when you place your order. You will then be able to organise and pay for this service once the stock has landed in your Cru account. Making this selection will not delay the transfer further.

Or
This item is currently ONLY available on On Allocation, please enter a quantity and your maximum price to submit your Allocation request.
Product Trading History ×
Add Billing Address
< Back ×
×
Sign In/ Create An Account To continue Buying and Bidding, please Sign In or Create an Account.
Add New Credit Card < Back ×
Sign In ×

Vintage Comparison ×
Overvalued
Undervalued
Terms and Conditions ×
Important: By clicking 'Place Bid' you are committing to purchase this product at the bid price and quantity you have set. The total amount of your bid will only be deducted from your account credit balance (where available) or charged to your default credit card when your bid is matched.

If your bid is successful, you will receive an email notification of your purchase. The price you are bidding also includes delivery to the nearest Cru storage warehouse to the current location of the item. However, there may be an additional transfer charge to move the product to another warehouse for delivery.
Confirm your bid ×
Loading
Condition Report Image ×
Live Chat with a Cru Advisor
×
×