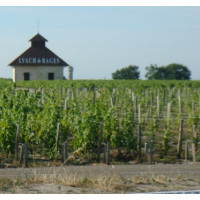 Château Lynch-Bages is one of eighteen Cinquièmes Crus (Fifth Growths) in the famous 1855 Classification. This noble estate in the heart of one of the grandest appellations on Earth has always been, and will always be, an exceptional piece of land for the cultivation of Cabernet Sauvignon in particular. Despite this natural proclivity for excellence, it was around the turn of the millennium that the transcendently nuanced layers of blackberry, tobacco, cedar and minerally slate began to emerge triumphantly from wine-stained glasses with delightful predictability vintage-after-vintage.

Situated on the outskirts of Pauillac, overlooking the Gironde estuary, the Lynch-Bages vineyard (1855 Grand Cru Classé) stretches over a beautiful gravelly hilltop. Formerly owned by the illustrious Lynch family, of Irish descent, the estate was acquired by the Cazes family in 1939.

The 2020 vintage marks a turning point in the history of Château Lynch-Bages : the first to be processed in our new winery, designed by American architect Chien Chung Pei.

A major destination for the considerable investment afforded to the property by the Cazes family over the past 30 years has been detailed soil and topographical analysis. This study found that whilst the majority of the Bages plateau was deep Garonne gravel (classic Pauillac), the vines were also planted variably on clay and limestone subsoil. Advancements in viticulture naturally allowed the family to change tack and adapt where necessary, and Lynch-Bages has produced some of the most gorgeously perfumed and aristocratically structured wine for decades.

A believer in late harvests, he made the wine riper and more powerful. The 90 hectares (220 acres) of Château Lynch-Bages are located just outside the town of Pauillac. The vineyard occupies a gravel ridge looking down over the Gironde estuary. The well-drained soil consists mainly of deep gravel beds over a limestone sub-strata, and it is planted 73% Cabernet Sauvignon, 15% Merlot, 10% Cabernet Franc and 2% Petit Verdot.

Echo de Lynch-Bages, the second wine of the estate, displays savoury aromas of fresh red fruits. Round, mellow and seductive in its youth, its ability to age is outstanding.

Blanc de Lynch-Bages was first released in 1990 and is historically one of the first white wines produced by a Grand Cru Classé in the Médoc. Bright and flavorful with citrus aromas in its youth, it develops harmonious floral notes with ageing.

Page:
12 Next
Terms and Conditions ×
Important: By clicking 'Place Bid' you are committing to purchase this product at the bid price and quantity you have set. The total amount of your bid will only be deducted from your account credit balance (where available) or charged to your default credit card when your bid is matched.